Life on the River

This article originally appeared in INLC's Winter 2013 newsletter. JoAnn Mack is the owner of land under a conservation easement with INLC.

Not long ago, I was standing on the far edge of our property watching the wind walk through the meadow on its way to the forested ridge. On the wind’s arrival, the aspens trembled and the firs bowed in greeting. Life is good, I thought. Memories took me back to when the meadow was a hay field. It had been drained in the 1950’s but little pockets of water stayed well into the summer. After a couple of summers, we realized we weren’t into haying. Neither my husband nor I were farmers. We didn’t have the equipment, time or knowledge to make this our profession. There is a reason why we named it the Crazy M.

Over the years, the hay field has become a meadow and wetland. The drains have been plugged, the pockets deepened to provide nesting areas for a variety of ducks and small water animals. For years water had found its way from the ridge to the river, leaving in its wake deposits of silt formed in shallow terraces across the field. These terraces were deepened to hold water long enough to let migratory birds raise their young. Perching poles now rise above the meadow grasses and can often be seen sporting a raptor looking for prey. To enhance wildlife, trees have been planted on the small rises between swales. Red Osier Dogwood and Drummond Willow provide cover around the small ponds and line the path of the water’s trek to the river.

The changes to the land meant change in the inhabitants. Subtle changes at first. New varieties of birds arrived, each with a unique song. From the front porch, evening can sound like a night at the Hollywood Bowl. Small animals make their homes in the brush. I was delighted to see an Ermine scamper out of the wood pile. As the grass grew and the water remained longer in the field, larger animals moved in. Now, if you’re picky about how your trees are pruned or you don’t like to share your garden, this might not be a positive thought. I find it fun to watch the habits of different animals even though I lament the loss of my petunias. The mama moose delicately prunes the snowberry bushes into pretty nice hedges but her boyfriend tears things out by the roots. In the fall a herd of elk take up residency in the soft grass. I have to admit, they’re kind of hard on the small trees.

A lot of work goes into having a meadow. For years our pastime has been spent planting shrubs and trees, and many hours tending to noxious weeds. It’s all worth it in the end. Life is good. What’s happening in your neck of the woods?

Why Waikiki? The history and future of Waikiki Springs Nature Preserve 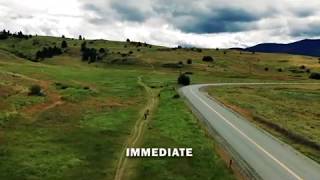